The Ugliest Church in the World

Today I sit in my cheerful room in La Loma Hotel in Pichucalco waiting out the rain before we embark on our three day stretch of cycling through the mountainous backroads of Chiapas. I try not to let my mind panic with the hypothermic memories from last year's last day of riding through increasingly chilly and steep altitude into our final destination: San Cristobal, Chiapas. It can't possibly happen twice, or can it? Basil and I look at each other and shiver with the thought. Rain! Rain! Rain! Get it all out of your system so that we might properly enjoy today's glorious ascent to Tapilula - and please be done by 8am. Looking through my window at the ugliest church in the world, I opt to say a little prayer to Chac, the Mayan God of rain. 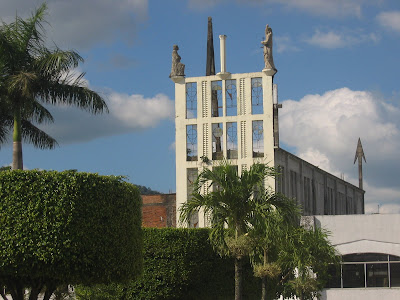 Taken on a sunny day, this is a photo of what Discovery Channel deemed the "Ugliest Church in the World". What does that look like sticking up from the back right hand side?
Posted by Alexandra at 5:15 AM No comments: 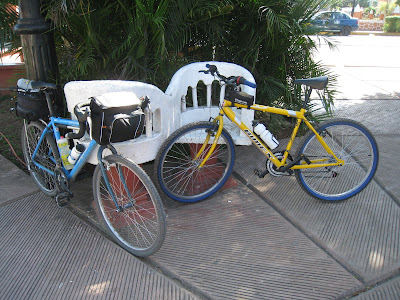 My intrepid pal Elisabeth likes to pop in to visit us a few times a year. Sometimes we are honoured with a whole week of her company over our shortest of bike tours, but usually it is just a few days. This trip was a birthday visit and we had an entire weekend between tours to have a speedy adventure in the Yucatan. This season's adventure was a 70km bike ride to Tihosuco.

Two of our fellow cyclists decided to leave their bikes in Mexico with the hope that they might improve somebody's life. After some thinking, I came up with the "Caste War Museum" in a small town close to the border of Yucatan and Quintana Roo States. Three years ago Basil and I were more than pleasantly surprised by this little community museum and it's multi-faceted director Carlos. In our exploration we passed through this friendly town and were taken to its museum to learn the entire Mayan story of Mayan resistance to the European invasion from the beginning to the ultimate culmination of the Caste War which started in the mid 1850's and trickled on into the first two decades of the 20th century. This museum tells the story of it's people by it's people and it is a true treasure.

The exciting part is that it is so much more than a museum. It is a gift to the children of Tihosuco. Carlos focuses a great deal of his attention on maintaining a strong connection between the elders and the youth of his village. He has spearheaded a project with the elders to record their knowledge of medicinal properties and applications of the local plants. Out of this has arisen a small handicrafts shop with a large branch focused on the sale of locally produced medicinal teas, soaps, and oils. Another project brings the elders into the museum at least once a month to share stories and legends with the children of the village. Recently a UN project donated some radio equipment to them which allows them to broadcast these meetings for the whole village to enjoy and now plans are in the works to set up a small radio station. These monthly meetings have also evolved into a video project that has recorded the Caste War memories of each of the village elders.

These are just a few of the ambitions of this community, and along with all of these things, they are also prepared to host visitors on extensive day trips sharing traditional knowledge in a variety of ways including: guided trips through the forest, the corn fields, traditional music and dance, traditional meals, and even homestays sleeping in a hammock in a Mayan home.

On our more physically challenging 3 week tour around the Yucatan two years ago, we slept and ate in the homes of some of the families in Tihosuco. We were the second group to be hosted by this community and it was a remarkable experience. With this in mind, I knew Carlos would be the man to find an excellent future for our orphaned bikes. So, we pedalled them there to give them to him and to enjoy a day learning about the past, present, and future of Tihosuco. We were rewarded with a song about a flirtatious lady cyclist. 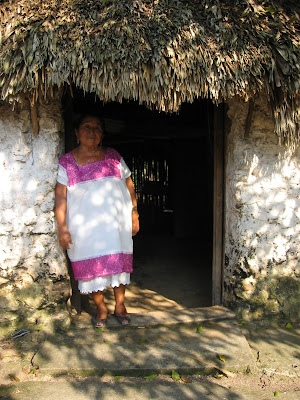 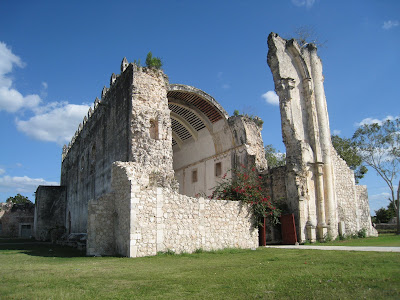 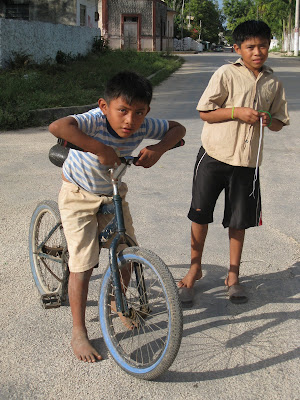 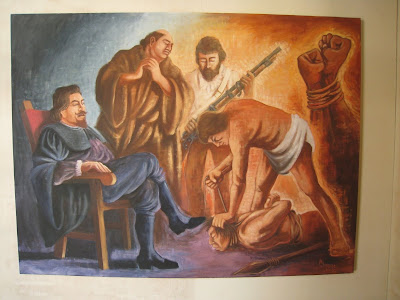 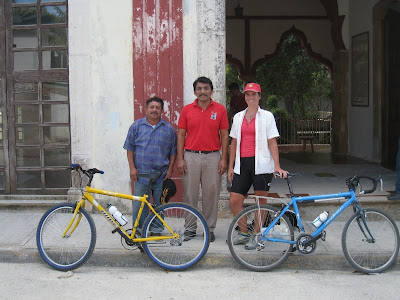 Posted by Alexandra at 3:48 PM No comments:

When I was a little girl I fell madly in love with boiled eggs. In those early days I think it was actually more about playing with the funky egg cups and smashing the empty egg shells with the back of my spoon than it was about the eggs, but eventually my love evolved to encompass poached eggs, eggs benedict, eggs florentine, and once I left home and started to travel it became all about the Italian fritatta, the Spanish omelette, and then one day a guitar playing chum named Lionel dragged me to breakfast at some British friends of his in a grotty little apartment in Madrid. We were all starving students and they apologized for what they had to piece together. I was handed a plate that contained a fried egg, a heap of acelgas (boiled greens), a spoonful of fresh tomato sauce, refried black beans, and a fried banana. To me it was a strange looking breakfast, but, as I quietly blended each of those flavours together in my mouth, I felt my concept of breakfast and eggs shaken up forever. Many times thereafter I dreamt of the flavours from that strange breakfast.

Eight years later, I found my way to Mexico where my tastebuds learned how to really appreciate an egg. Huevos rancheros, a la mexicana, chilaquiles, en salsa verde, they're all delicious, but the King of all egg dishes has to be: huevos motuleños. 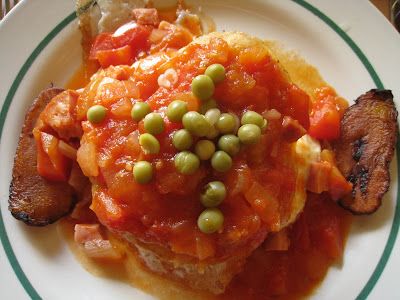 A corn tortilla smeared in refried black beans, topped with a fried egg and fresh tomato salsa. This is then topped with another bean-slathered corn tortilla and a fried egg with more tomato salsa. This is sprinkled with chopped ham, peas, cheese and, last but not least, fried plantain is placed on the side. I couldn't believe my eyes or tastebuds when my dream breakfast from Madrid 8 years prior, appeared at my table only this time with a whole lot more style.

I've since discovered that this fusion of Mayan and Lebanese cuisine was invented especially for Governor Felipe Carillo Puerto at a Motul restaurant owned by a Lebanese man named Jorge Siqueff. Today his family still owns a restaurant in Merida called Siqueff on Calle 60 between Calle 35 and Calle 37. The setting is peaceful and the eggs are phenomenal.
Posted by Alexandra at 8:43 PM 1 comment:

Hydrate or Die...or at least cramp up and feel like crap for a few days 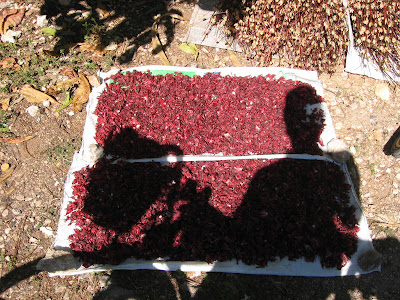 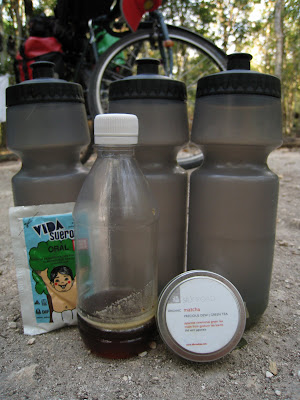 It's sizzling hot out there. You find yourself craving sickly sweet drinks. For the distance you've gone, and the terrain you're riding, you're unusually tired. Your brain feels sluggish and your legs feel like lead weights. You're dehydrated!

In Mexico the fridge is always full of Coca Cola, and often you can find some brand of sport or energy drink, but there is also a much more natural alternative to help you stay hydrated while on the go in Mexico. Basil (my beau) promotes it as "Basilade" to our riders who join us every year for a little bit of riding in the sun...

Suero Oral - (unflavoured electrolytes in powder form) are available for free at all public health centres (Centro de Salud) and artificially flavoured ones are available at some pharmacies. It comes in little envelopes (see photo above) filled with the correct balance of electrolytes to rehydrate an infant suffering from severe diarrhea. We use it as a preventative measure adding one or two ice cream taster spoonfuls to a bicycle water bottle. Now an important and often overlooked step in our home made gatorade is to add in a little sweetness to assist in absorption. Some people add a little juice, or a little world class Mayan honey (the brown stuff in the bottle in front of my water bottles), or a little sugar, and a little something else for flavour...I went through a little Matcha phase (that's what is in the circular tin in front of the water bottles featured above), but a truly local choice is Jamaica or Hibiscus flowers. I've posted about this fantastic little flower before, but above is another picture I took of some drying by the side of the road. A few of these flowers along with some honey and some salts is DeeLish and good like cranberry juice is for a ladies pee parts which is always helpful for when your chamois is smooshed up against a saddle all day! While this beverage is traditionally served cold here in Mexico, as your bottles heat up throughout the day you can pretend you have been invited into an Egyptian home for some hot hibiscus tea. Hot or cold you can't lose with tasty sweet-tart hibiscus.

In pharmacies you will also see plastic bottles of liquid Pedialite which is also used for rehydration, but it has a terrible artificial taste and once opened must be kept cold which is a problem while bike touring. The powder works well because you can mix as you go. This brings me to another important point, you really don't want to over do it with the salts too many can cramp you up and make you feel as bad as if you cycled around in 37 C heat all day without any salts at all. You just need a little bit. Experiment - it is a very personal balance. Some people need half a taster spoon and a ton of sugar, some people need two heaping taster spoons and a little bit of sugar - we're all different! Listen to your body and you'll learn your own recipe.

And two last things about keeping those muscles feeling good by staying hydrated in the heat:
1. Do not keep your Basilade drink longer than 24hrs. It will go bad. Mix as you go...
2. Rinse your bottles and let them dry EVERY night! The tropics are a breeding ground for bacteria and fungus. If you do not rinse your bottles then you will be ingesting a jungle full of bad guys.
Posted by Alexandra at 7:52 PM No comments: