"Shrimp, shrimp, shrimp, shrimp" so began my mantra after 20 km of being beaten in the face by some seriously nasty headwind on our way into the city of Durango. I couldn't wait to get to Mazatlan and the beach.

Durango was a pleasant surprise and it wasn't for the chocolate cake and candied pecans I found either. I swear we were the only tourists in town and yet, with it's pedestrian streets and beautifully lit colonial buildings, Durango shone as if it had just been polished up for some international touristic event. Only there was no international event. Durango is just a lively and prosperous place. If it weren't for the fact that this capital actually sees snow in the winter I'd say that I'm shocked the place isn't full of gringo retirees. While we were excited to finally be turning onto the Ruta 40 which leads to the Espinazo del Diablo, we were also sad to be leaving this gem of a place. 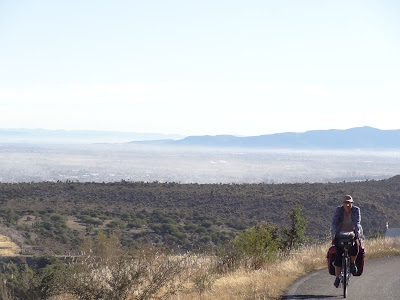 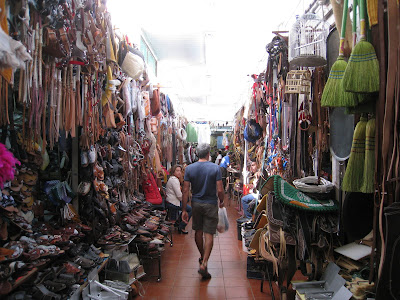 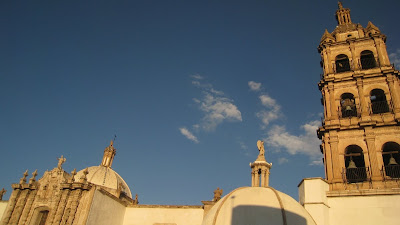 Onward and upward we went only to be passed by at least a hundred local riders out for a Sunday ride. The folks were unusually accessible and curious for Mexican road riders, we exchanged stories and got the details about the ride that lay ahead. Most of them knew it intimately from an annual event arranged by Vagabundos Durango that follows this route from Durango to Mazatlan in two days and attracts over 500 riders. Were were doing it in three and it was still plenty tough. 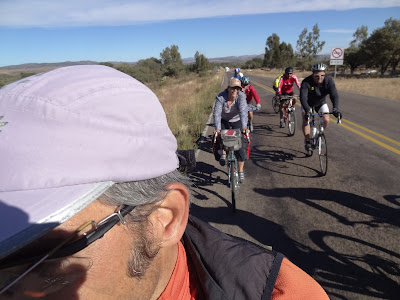 The second day we paralleled the new toll road for a good distance and then made it to the the heart of the reason we were there "the espinazo!". To say this road ribbons, undulates, or meanders is an understatement...sinuous curves- oh yes it is all of those things. You reach a point where you feel you should must begin your descent to the sea, but the road drops twists and then regains all of the altitude you just lost. It does this countless times for more than 40 kilometres. Granted you do gradually do lose some altitude, but the only thing that makes this loss feel rewarding is the sea of disappearing blue mountain ridges that wash out to the left of you as you make you way down the road. It takes a long time before the metres disappear easily. A man directing traffic around a bit of road constuction eggs us on with accolades as to our cycling prowess and how tough these hills are. Basil moans of how this might be the toughest downhill ever. 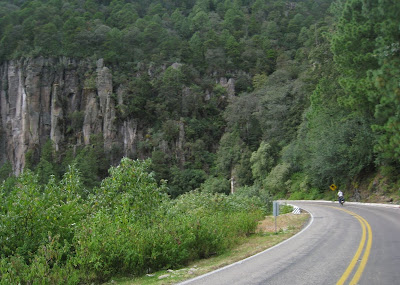 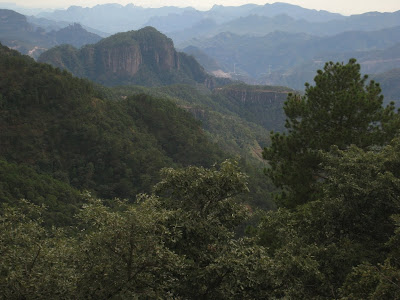 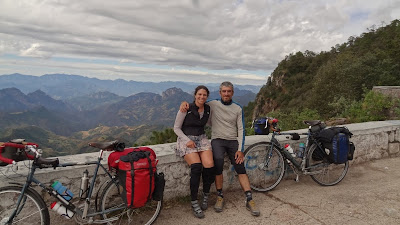 And then all of a sudden we are at the sea and eating shrimp on the beach in Mazatlan. 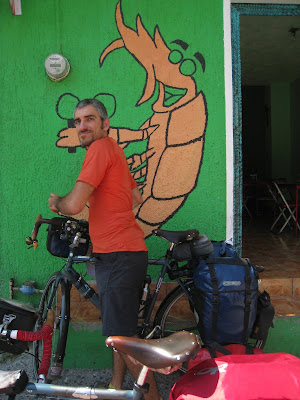 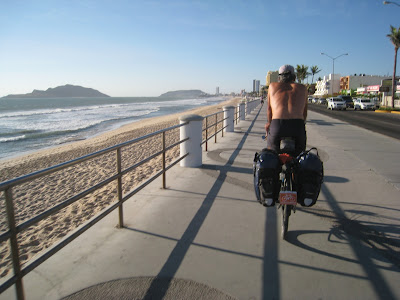 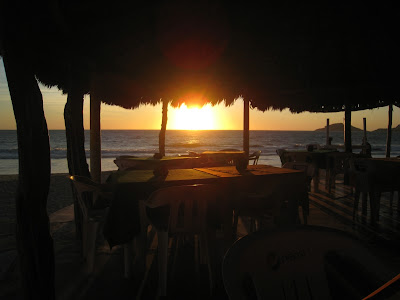 Posted by Alexandra at 1:55 PM

You earned every one of those tacos de camarones! Brava, Alix!