Basil bikes with a pet. It lives in a jar and feeds on milk.

This means that the quest is on for finding milk everywhere we go. We are always either finding milk or finding how to store milk and timing feedings just so. It really doesn't affect me much other than being dragged into a variety of shops looking for milk and occasionally helping out by washing out the milk glass. However, I have witnessed and enjoyed some interesting milk related interactions; the most recent one being here in Oaxaca.

We walk into a fancy organic food shop. Basil spies dairy products in the fridge. He sees a knowledgeable looking fellow standing nearby who seems related to the store. In flawless Spanish he asks if they have sheep's milk. Stunned, the man says tells him that nobody has this kind of milk in Mexico and that such animals are only used for meat and wool here. Basil informs the man that it is found in large quantities all over Greece. Quite surprised the man says that their animals give so little milk that only the farmer could enjoy such a thing. He goes on to explain that the udders are so tiny that they are very difficult to milk. I can't help but giggle when he starts to make very tiny yet defeated milking gestures. We all shrug and Basil and I head off to breakfast.

Basil continues to ruminate this conversation over in his mind and, hung up on the thought of tiny unproductive sheep udders, he eventually looks up his word for sheep: borrego. He is humbled to learn that his flawless Spanish can still get him into trouble. He confesses to me that he learned that he was in fact asking for lamb's milk! After a good snorty laugh we then wonder what the heck the organic food guy was on about? Can you really milk a lamb? Or was he just running with Basil's false claims? 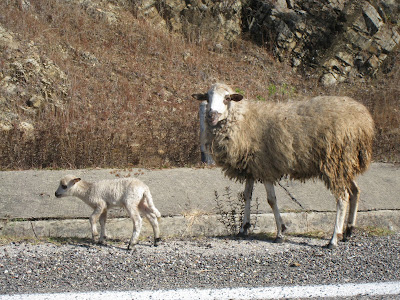 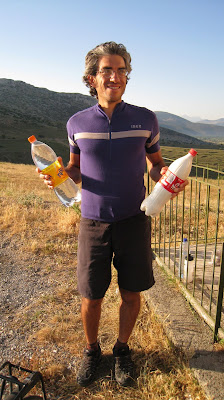 Posted by Alexandra at 1:11 PM

Basil gave me one of is pets once. But, not being a very responsible pet owner, I think mine died from neglect... I think it died, but I don't how you could ever be sure. After one incident of pretty serious pet neglect, I thought the milk seemed different. I was left wondering if I was drinking kiefer spoiled milk, or tropical heat spoiled milk, or maybe some combination..... and, what the heck the main point seemed to be that I was drinking spoiled milk! So the pet, dead or alive, ended up getting flushed....