We have delved further into the question of sheep (oveja) and lamb (borrego) and it turns out that in Mexico they do indeed say borrego for both. In Spain they don't and who the heck knows what they do in all the many other Spanish speaking circles.

This brings up so many other confusing questions, but for now I'm inclined to focus on citrus: why are limones and limas totally different things in Spain than they are in Mexico? I would love to know who is getting it backwards and why. 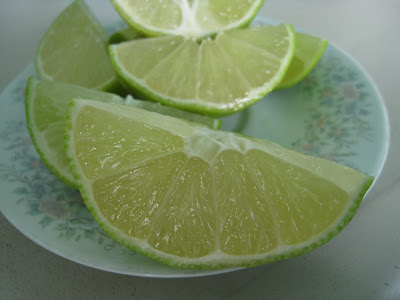 In Spain, a limon is a lemon and a lima is a lime. In Mexico, a limon is a lime while a lima is some other citrus fruit altogether and I have yet to see a lemon here. If you're in the Yucatecan part of Mexico, then (to add to the whole citrus mix up) a sweet orange is very commonly called a china (a mayan word) and less commonly a naranja (Spanish) naranja agria, however, is a sour orange used to marinate some delicious Yucatecan meat dishes. The good news for me is that, so far, a grapefruit is a grapefruit is a grapefruit – toronja. I'm partial to this Spanish word as it always has and always will make me think of Toronto which is where I spent a good chunk of my happy and less confused young adult life . I'm thankful that the toronja hasn't entered the great citrus debate. Bless you grapefruit for being so straightforward and delicious.
Posted by Alexandra at 11:00 PM